Christmas day I was busy putting together a ping pong table (who knew there would be so much assembly) when I received the following email from Erik:
"Monday morning I'm thinking of exploring the ridge north of Parley's.  Starting just above the Parley's Pedestrian walkway where it enters Foothill Boulevard, and then following the ridge east until it comes out at Little Mountain.  I have no idea how long it is, or how long it will take, but I'm thinking 4-5 hours?. I'm sure there's some sort of a trail, whether it be human or linking up some game trails. Has anyone done this before, or have any knowledge of it, and more important, would anyone care to join me?"

Following this email was pretty much radio silence except from those that were going to be "out of town". I was in need of toughening up the shins and some outdoor time, so I replied with "I'm in, give me a time".


View Parley's North Ridge Run in a larger map
The route from the mouth of Parley's Canyon to Little Mountain a the top of Emigration Canyon.

At 7am Erik and I headed up the trail to attempt to link the entire ridge. The early going was pretty straightforward and straight up, gaining a couple thousand feet within a few miles.
After gaining the ridge we came to the first drainage/bowl and the trail virtually disappeared. Down below us, near interstate 80 we could see the gravel pit and in front us a hillside full of scrub oak with a few junipers mixed in.

We tried to pick a route that would be friendly to our shins using various rock outcroppings and the junipers, but there was no way we were going to get through the next 2 miles cleanly. Shortly after realizing one of my shins was bleeding I heard Erik yell out that he saw something exciting. We were in the nastiest part of the whole bushwhack when he found an elk antler. He was so stoked that he sounded like a kid on Christmas morning.
Another 1/2 mile or so and we were done with the Class III bushwhack and began the small ups and downs along the rest of the ridge. 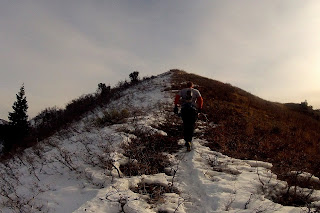 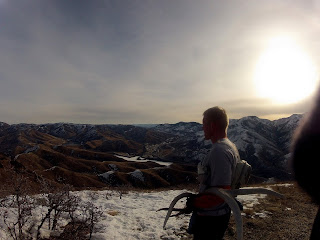 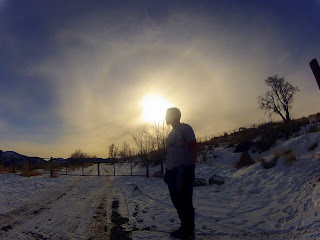 Not really a "run" so much as it was an adventure and a good one at that. We stuck to the true ridge for 90% of the route but there is a mile or so where it's just not possible. When we deviated from the ridge the south side provided the "easiest" travel path.
I'm going to go out on a limb here and call this an FKT, but it's a soft one. Someone is bound to do it faster (or has already done it) and I can't wait to hear about it.
Here are the stats...
Distance: 9.1 miles
Vertical Ascent: 3,750' (measured by a Suunto altimeter)
Vertical Descent: 2,360'
Time: 3 hours 20 minutes.
Posted by Christian at 1:09 PM

Sounds like a great adventure...I can't believe how dry the trails are right now. Erik I am curious how you like the Lone Peaks since you typically run in shoes that I also enjoy...is the transition to zero drop annoying? I really want the shoe but don't want to mess with my runs to much :)

Last year I did most of this route but as an out-and-back from Little Mountain. There are great views up there but a few of those little hills are steeper than they appear from afar! If memory serves, I mistimed the sunset and did the last mile or two in darkness. Good times.

Excellent job as always, fellas. I'm impressed you managed to get up that western ridge. I've eyed it before but never attempted it. Nicely done.

I've also done the main peak (it's actual name is Perkins Peak) from Little Mountain also. Like you said, not so much of a run as a hike. I've thought many times about doing it from the valley, but just haven't made it a priority. Way to go out and get it done.

Nick-
I've enjoyed the Lone Peaks so far. The transition hasn't been bad because I'm only running a couple times a week right now. I think if I had jumped into them full bore, i would have had some issues. Even with the low mileage, I noticed some soreness in my calves/achilles that I don't normally feel. I think it's definitely something that you need to ease into. Today was the longest time wise, and the most rugged terrain I've used them in, and I was pleased with how everything felt and with how they held up.
Christian has some insight into them as well that will probably be addressed in a review in the not too distant future.

Great! Excited to hear what Christian has to say...thanks guys

Not that you guys probably care what my feedback is, but I've been running exclusively in Altra's since April and the Lone Peaks specifically since Nov 1. They do take some getting used to, but after that they are pure heaven. Best traction of any trail shoe I've worn yet.

I've wondered about this ridge for a number of years now-usually eye-balling it from up on Black Mtn and wondering how far it really is to access Little Mtn.

Totally unrelated to this post, but is there going to be a Grandeur Peak Fun Run in 2012? Inquiring minds want to know.

Anonymous-
Not sure exactly when the Fun Run will be. I'm out of town the usual 3rd weekend, so that means a potential 2nd weekend with more snow possibility, or the Saturday of Memorial day weekend. Otherwise it would be pushed into mid-June which I don't really embrace the idea of.

Any thoughts or preferences?

I once did that hike, but I started at the "H" and then hitchhiked back from Little Mtn Summit. I stuck to the ridge, and at times my feet never touched the ground because the brush was so thick. I vowed to wear thick jeans the next time I do the hike, no matter how hot it is. +1 for more snow on the Fun Run.

Well Cristian I don't know if you remember me but you coached me my freshman year at West and well tomorrow I think I am going to try this, I've done some running in the area and I am very excited to try it

Hey Magnus, of course I remember you! Good luck with the route, let me know how it goes. If memory serves, I believe there is a geo-cache I accidentally found right when the bushwhack started to get thick.