This is pretty much how it's been in my kitchen today.

SkiMo and finding my mojo

Wow, it's been a while since I've done a post. I suppose I've been feeling a little uninspired since the Wasatch 100 that wasn't. I was one of the many that failed to finish this year's run and while I could make many excuses it was my own fault. Something I learned from this year; if I'm going to put high expectations on myself then I also have to be able to deal with it when it doesn't work out. Which brings me to the reason for this post: SNOW and the MOUNTAINS! If you want to skip to what I'm about to write about got to: UTAHSKIMO.ORG

After Wasatch I took some time off before turning my attention to new mountain activity for me, SkiMo. I wrote about this last year after I jumped in the deep end and ended up having a great time. Now I have a little more experience and I want more of you to join me. I want to make it clear that I am in no way an authority on ski touring or SkiMo, I just have a blast participating in it and learning a wealth of information along the way. SkiMo is short for Ski Mountaineering and is basically a race on the snow, up a hill, back down, repeat often.

First you must choose your gear. Alpine touring gear is the current fast gear but you can use anything you want except full nordic gear (cross country, skate or classic) tele skis, or split boards were seen often last year. Next you need a little bit of fitness so that once you get up the hill you can ride back down.

Up until 2 years ago there was basically one race here in the Salt Lake valley that one could participate in if they were into moving fast across the snow. That race is the Wasatch Powder Keg, which has been around for many years and this year it will be the North American Championship race. In addition the Keg we have a full series of races that are set in a low key, affordable environment. Thanks to the enthusiasm of Chad and Emily Brackelsberg, Andy and Jason Dorais, Jared Inouye, as well as many other volunteers we have 8 races leading up to the Powder Keg in March. The Wasatch Citizen Series. What started as a few folks showing up on Tuesday evenings at Brighton, turned into steady turnout with 40 to 100 people showing up regularly last year. Why? Because it's fun, the people that show up are friendly (many you will recognize from trail running) and there's no pressure. Visit UTAHSKIMO.ORG to learn more.

What to expect:
The races are at Brighton ski resort, mostly in the evening starting at 7pm, ending at ~9pm, hang out at Molly Green's afterwards for prize drawings and getting know friendly folks.
Full avy gear is not necessary so don't worry about a pack (this is required for the Powder Keg though). Bring a headlamp even though we are often getting light from the night ski runs. You'll also need a helmet. I would suggest a bike helmet if you don't have a skimo specific helmet, a normal ski helmet will be way too hot. Many people bring a heavier jacket to the start/finish area and leave it there. Don't overdress, just like running you will generate a lot of heat going uphill. The courses are generally quite short, about 10 to 15 mins up, focusing on the transitions from up to down and back again. There are usually two categories, Race and Heavy Metal. Race is for light gear, Heavy Metal is for more mainstream touring gear. Go as fast or slow as you want nobody is keeping track and there are no results.

Last year the greatest benefit was all the new friends I made. Side benefits included gaining some fitness with an activity other than running and last but not least, faster transitions. Hope to see you out there.

Posted by Christian at 7:42 PM No comments:

Most of us have experienced it - feet damaged by the miles, the wet, and even sometimes an ill-fitting shoe. While we might be proud of the miles we can cover, the races we have finished, and the friendships hours on the trail have created – it has likely come at the expense of having beautiful feet. 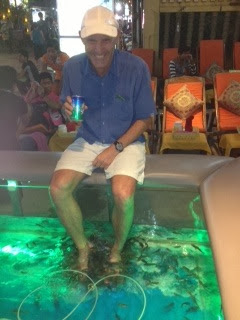 Lest you despair and think that beautiful feet and ultra-running are incompatible, let me give you hope. I was recently in Northern Cambodia and heard rumors of fish that ate the dead skin off one’s feet. At first I thought it was just another crazy travelers tale, but upon hearing about “the fish that eat dead skin” from several sources I went in search. You see, I’m a seeker and I want beautiful feet!

We’ll I found the fish and gave it a try. $1.00 for 30 minutes. What did I have to loose other than perhaps my toes. When I dipped my feet into the tank they were swarmed by the small fish. The Cambodian owner of the fish said “You feet really dead. Fish like very much!” Nice, I’ve always wanted feet that were attractive to somebody, or in the absence of somebody, something….

A rather interesting experience… I could feel little bites on my feet as the fish nibbled away at the dead skin. I was glad they liked my feet, yet wondered if their gluttony was a deadly sin in the aquatic world. Would they be punished for the good they were doing to my feet? 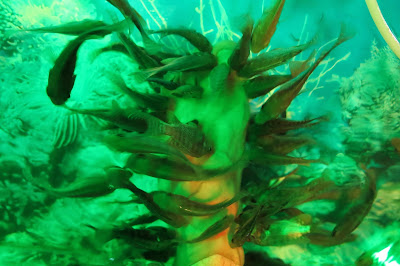 Without giving too much thought to the fate of the gluttonous fish, I awoke the next morning to noticeably softer feet. Hmmm, I thought to myself – might there be a market for selling trail-running and foot fish exfoliation travel packages to Cambodia??
Posted by Jay at 11:38 AM 2 comments: