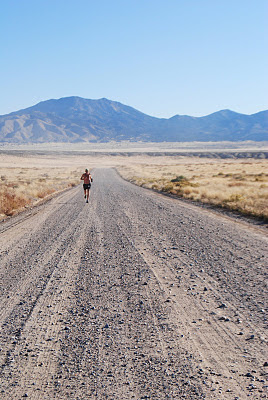 The Pony Express Trail 100 was an important race for me. I had a number of objectives going into the race. First, I wanted to try and set a 100 mile PR. Second, I thought I might be able to go sub 15. And perhaps most importantly, my daughter Zoe was going to crew me. Zoe has never watched me run, and something inside me wanted to make her proud of the old man! 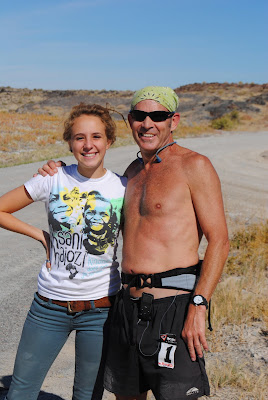 My original plan was to try and run a negative split, something I have never been able to do because of my compulsion to go out fast. The Pony Express Trail 100 would not be an exception; I was not able to hold myself back and again went out faster than I should. At 24.4 miles I was averaging a 7:22 pace (granted most of the first part of the course was a gentle downhill). I reached mile 33.3 in 4 hours and 15 minutes, still maintaining a sub-8 minute mile pace. When I reached 50 miles in 6:52 and feeling great, I knew today was going to be my day. I had already begun celebrating in my mind, running a sub 15 100-miler.

Then, at mile 65 with no warning I started to get cramps in both my calves. Since the day was warm and sunny, with a light breeze I immediately assumed I needed salt. I popped several salt tabs. The cramps got worse. I could no longer run. I stopped to regroup and took a pee. My meager dribble looked like orange juice. “Goddamit!” I said to myself, “how could I have allowed myself to get this dehydrated?”

I started to drink but my stomach wasn’t emptying. I was reduced to a walk because of the cramps. I felt like I was going to hurl. I wanted to hurl. How could this be happening when everything had been going so well? I fought back the tears.

I walked three miles to the Blackrock aid station (mile 68). In a state of desperation and self-pity I broke both of my cardinal ultra running rules – I stopped AND sat down. My two rules are rather redundant, but they have served me well. 1) Always keep moving forward, and 2) Never sit down. 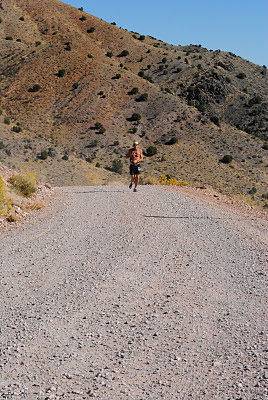 After about 5 minutes in the chair I had decided that if needed, I could walk this one out. I was not going to drop. I moved on. Rather surprisingly the cramps were gone. While my legs felt a bit weak and my stomach was a wreck – I was running – albeit slowly. By the time I had climbed Dugway Pass (79 miles) my overall pace had dropped to 9-minute miles. But, breaking 15 was still possible. It would be hard given that it was now dark and I hadn’t gotten my stomach back. And I could tell I was about to run out of gas for the lack of eating. While I had been continuing to drink, I had not been able to eat for the last 11 miles. I knew I had to get something in the tank. I forced a gel. I laughed to myself thinking the running part is easy. Eating these damn gels is what is hard.

My favorite part of 100 miler is the last 20 miles. For some reason I am past the pain and hurt. I can crawl into my head and the miles seem to go by rather quickly. I ran hard and my legs felt strong, but I was having a hard time motivating myself to really push the pace. It was if I didn’t want to break 15 as punishment for having screwed up with my hydration and I needed to suffer the consequences. And at some level, I didn’t really care – it was still going to be a good time for me. 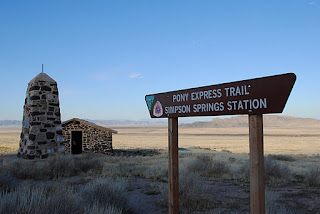 I crossed the finish line in 15:06 achieving my goal of a PR. I was happy to be done. It had been a good race (for the most part). And yet again, I had learned some valuable lessons. Perhaps after of few more years of mistakes and learnings – I will be able to get good at this sport!

Some thanks are in order… A big thanks to race director Davy Crockett for organizing a great event and to all the volunteers who trekked out to the west desert for the day. Given the remoteness of this race, logistics are challenging. Thanks to my daughter Zoe who afterwards remarked, “that was more fun than I thought it would be.” Maybe I have a regular crew now, and perhaps someday even a pacer!! Another good day in the Montrail Rouge Racers. For some reason when I put them on I am happy and I feel quick. I’ve had some great races this year in the Rouges. Thank you Montrail. And, I had the privilege of testing out several of Gregory’s new hydration products during the race. They’ve developed a great waist pack with zero bounce! Watch for it in stores next spring. It rocks!
Posted by Jay at 1:41 PM

Fantastic job Jay! I was a couple miles from finishing up my 50 when you came running towards us (probably around mile 70) you still looked smooth and strong despite what you had gone through just a few miles before. What a finishing time!

I am amazed that you are able to go that fast for that long. I am doing my first 100 in 3 weeks and can't fathom that the last 20 miles would be the best.

Nothing short of amazing. You make us all very proud. I am bragging about your accomplishment any chance I can. Second fastest time in the 50-59 age range for a 100 mile race.

Probably safe to say that you ARE good, if not great, at this sport!

Cory - I'm guessing you're running the Javalina 100. It's supposed to be a great first time 100. Good luck! Don't let dehydration sneak up on you as you will likely be in the sun all day. Getting dehydrated sucks!!

I'm toying with running Javalina. I'm feeling good and kinda think I have one more 100 in me before putting away the running shoes for the year and getting out the skis!

Saw you running as I was driving back from the 50 mile finish. You looked good... smooth and fast... I couldn't tell that you were hurting.

Jay,
Like your blog... is there an ultra running trail group in the area? Hopefully with some people who don't run quite as fast as you?
Thank,
Bill.
dc.billw@gmail.com

Simply incredible Jay! Congratulations on a smokin' fast time and PR. I'm just hoping this effort will slow you down a bit for our adventure in a couple weeks.

Jay, thanks for the high-5 out there. It was motivating to see you moving so fast. And to be honest, seeing you further into the race than I expected to gave me the confidence to move faster. I appreciate it. You've set a course record that will honestly be tough to beat, for sure.

Jay not sure how too break it to you but you already are pretty dam good at this sport. Great race and congratulations on a PR and big win.

super-cool! congrats on a great race!

Just got home and saw the results. I'd like to think of something clever and insightful to write, but the only thing that keeps coming to mind is Simply Amazing!!

Wow...you tore it up! Enjoyed the chase, although it was clear very early on that none of us were going to catch you. Congrats on a great run.